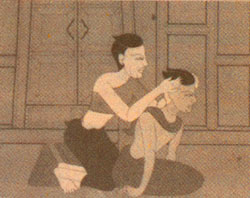 The Buddha was not interested in discussing unnecessary metaphysical questions which are purely speculative and which create imaginary problems. He considered them as a ‘wilderness of opinions’. It seems that there were some among his own disciples who did not appreciate this attitude of his. For, we have the example of one of them, Malunkyaputta by name, who put to the Buddha ten well-known classical questions on metaphysical problems and demanded answers.

One day Malunkyaputta got up from his afternoon meditation, went to the Buddha, saluted him, sat on one side of the road and said:

The Buddha’s reply to Malunkyaputta should do good to many millions in the world today who are wasting valuable time on such metaphysical questions and unnecessarily disturbing their peace of mind:

‘Then, Malunkyaputta, even you, did you tell me: “Sir, I will lead the holy life under the Blessed One, and the Blessed One will explain these questions to me”?’

‘Even now, Malunkyaputta, I do not tell you: “Come and lead the holy life under me, I will explain these questions to you”. And you do not tell me either: “Sir, I will lead the holy life under the Blessed One, and he will explain these questions to me”. Under the circumstances, you foolish one, who refuses whom? (i.e., both are free and neither is under obligation to the other).

Then the Buddha explains to Malunkyaputta that the holy life does not depend on these views. Whatever opinion one may have about these problems, there is birth, old age, decay, death, sorrow, lamentation, pain, grief, distress, “the Cessation of which (i.e. Nirvana) I declare in this very life.”

‘Then, what, Malunkyaputta, have I explained? I have explained dukkha (suffering), the arising of dukkha, the cessation of dukkha, and the way leading to the cessation of dukkha. Why, Malunkyaputta, have I explained them? Because it is useful, is fundamentally connected with the spiritual holy life, is conducive to aversion, detachment, cessation, tranquility, deep penetration, full realisation, Nirvana. Therefore I have explained them.

It seems that this advice of the Buddha had the desired effect on Malunkyaputta, because he is reported to have approached the Buddha again for instruction, following which he became an Arahant.


From: What the Buddha Taught, by Walpola Rahula.

Malunkyaputta's questions are good ones, though, which I permit myself to speculate on sometimes! Thanks for this, Rama.

hi rama,
thanks for this chapter. and i almost thought reading from a religious magazine. good writing sir.

This story strikes me as very important for my own piece of mind. I ask so many questions! And the answers inevitably spawn more questions...

My intellect has a deep desire to understand, which affects my ability to 'just let go' into Zen mind.

I think I need to find a middle way. Any suggestions?

One of the finest and inspiring stories I ever read. I remain a student of physics throughout my life and have these questions in my mind. So I have to read Hawking and Buddha both. I recommend that everybody should read "Budhha and his Dhamma" by Ambedkar.I have reasons to believe that most religions have turned mysteries more mysterious because there approach was mysterious. Only Buddha had a different way of explaining things.Physics try to answer but where is peace ?
This reminds me of "Amritkatha" published in Saptahik Bartaman. Thanks Rama.

Gaelin - the force of the intellectual tendency - is also ultimately a form of vanity, attachment and subjection. The intellect needs to be developed and exercised, and then transcended, treated as a useful toll when needed. In good time the sincere and diligent seeker will attain that. Transcendental experiences help to advance that journey.

BB, yes, religions have tended to dis-empower the common man while empowering a priesthood. But there are "mysteries", of the psyche, which can only be sensed and resolved by oneself, they defy verbal description beyond cliched, confusing words. They are mysteries only in that unless one knows for oneself they are incomprehensible. But the seeker is like a scientist: observing, experimenting, inferring, relating, concluding, correcting. "The Path of Purification" by Buddhaghosa (Visuddha Magga) conveys this self-scientific approach. I am also reminded of Sri Aurobindo's record of his "yoga".

Buddha was a social reformer / revolutionary, as well as a mystic. Ambedkar, as Rahul has written in his blog (appearing on my blog roll), interpreted Buddha's message and path in a new fashion in the contemporary Indian context, of social stratification, inequity and injustice.