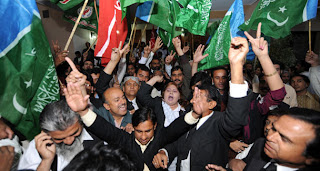 I celebrate with Pakistanis the announcement by the Prime Minister of Pakistan that the former Chief Justice of the Supreme Court of Pakistan, Justice Iftikhar Chaudhry, who had been sacked by erstwhile dictator Musharraf, would be reinstated. This followed the mass demonstrations across the country, led by lawyers.

Indians have much to learn from Pakistanis about keeping democracy alive. Indians have been lulled into slumber by the rituals of democracy in India, devoid of its substance. Thus, the forthcoming parliamentary election in India (April-May) is being billed as the greatest event in the history of democracy... rubbish!

For too long, for an entire generation, Indians have taken their democracy for granted, and been steeped in apathy. And thus rendered our democracy comatose. A democracy is only as good as its citizens' consciousness and activism.

In the state of West Bengal, where I live, the ruling govt committed a crime against humanity in Nandigram exactly 2 years ago - and is still in office! Yes, there were protests, rallies and demonstrations. But the people at large, and especially the "intelligentsia", are great "constitutionalists". The rulers can only be overthrown through the ballot, they say! "Politics" is understood to mean merely party-politics. Not popular consciousness and action! But if 1 million people had converged on Writers' Building (the seat of govt, in Calcutta) and bayed for the blood of the killer govt / ruling party - that would have seen the rulers scurrying out like rats through the drain-pipes.

So, I hope my fellow-countrymen (and women) learn from our dear neighbour, Pakistan. And until then, I doff my topi to Pakistanis and say: Pakistani Zindabad! (Long Live Pakistanis!)

dont be too optimistic. i have a feeling that zardari has done this at the behest of the USA

1. You seem to be overcritical of the 'rituals of democracy' in India! It would be erroneous to assume that in the current age 'democracy' represents the ideals of political philosophers as Locke and Dahl. We should, in fact, look at it as a lesser evil.

2. A review of Pakistan’s constitutional and political history indicates that the Supreme Court has mostly been involved in the political function of legitimating the de facto power- something the Indian SC has rarely indulged in. Chief Justice Chaudhary is no stranger to this. In May 2000, Justice Chaudhry was on the twelve-member bench that reviewed the challenge to the coup and decided in favor of Musharraf. In 2002, he was on the nine-member bench that upheld the legality of Musharraf’s extra-constitutional referendum to become the president of Pakistan. In 2003, he was on the five-member bench that upheld
Musharraf’s amendments to the basic structure of the Constitution. In 2004, when the
parliament elected under Musharraf passed an act allowing Musharraf to retain his uniform, Chaudhry was on the five-member bench that upheld the act in 2005. Shortly
after that decision, Chaudhry became the chief justice of Pakistan. As the Chief Justice, he blocked the National Reconciliation Ordinance to prevent Benazir Bhutto from coming back to Pakistan. It is clear therefore that Chaudhry had a solid record of providing judicial legitimacy to the de facto regime, the most basic function of Pakistan’s Supreme Court. How would Chaudhry end up in confrontation with Musharraf in less than two years, a question no body seems to be asking.

3. Judicializtion of Politics can not be permitted under any circumstance. It also appalls me that a legal complex uses not only a legal strategy, but also insurgent politics to achieve its goals. We are lawyers, not members of the mob!

4. Perhaps this is why I am not as excited at the reinstatement. I even doubt whether this came by a judgment, or a mere Executive Order of the President. As the reader before me has commented, it might just be a political compulsion on part of the Pakistan government!