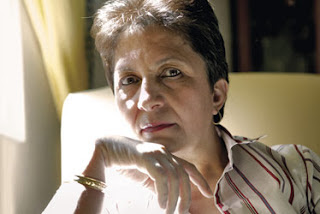 A friend sent me a link to a video clip, saying “watch this clip from Al Jazeera before its taken off the web”.

I clicked the link – and heard the discussion in Arabic, with English sub-titles. Its also available on YouTube.

This is an interview with Arab-American psychologist, Wafa Sultan, shown on Al Jazeera TV (Qatar) on 21 February 2006.

I am reproducing the transcript of the interview here.

What we see today is not a clash of civilisations. Civilisations do not clash, but compete.

I understand from your words that what is happening today is a clash between the culture of the West, and the backwardness and ignorance of the Muslims?

Yes, that is what I mean.

Who came up with the concept of a clash of civilisations? Was it not Samuel Huntington? It was not Bin Laden. I would like to discuss this issue, if you don’t mind…

The Muslims are the ones who began using this expression. The Muslims are the ones who began the clash of civilisations. The Prophet of Islam said: “I was ordered to fight the people until they believe in Allah and His Messenger.” When the Muslims divided the people into Muslims and non-Muslims, and called to fight the others until they believe in what they themselves believe, they started this clash and began this war. In order to stop this war, they must re-examine their Islamic books and curricula, which are full of calls for takfir and fighting the infidels.

My colleague has said that he never offends other people’s beliefs. What civilisation on the face of this earth allows him to call other people by names they did not choose for themselves? Once he calls them Ahl Al-Dhimma, another time he calls them the “People of the Book”, and yet another time he compares them to apes and pigs, or he calls the Christians “those who incur Allah’s wrath.” Who told you they are “People of the Book”? They are the People of the Book, they are people of many books. All the useful scientific books that you have today are theirs, the fruit of their free and creative thinking. What gives you the right to call them “those who incur Allah’s Wrath”, or “those who have gone astray”, and then come here and say that your religion commands you to refrain from offending the beliefs of others?

I am not a Christian, a Muslim, or a Jew. I am a secular human being. I do not believe in the supernatural, but I respect others’ right to believe in it.

Are you a heretic?

You can say whatever you like. I am a secular human being who does not believe in the supernatural …

If you are a heretic, there is no point in rebuking you, since you have blasphemed against Islam, the Prophet, and the Koran …

These are personal matters that do not concern you. Brother, you can believe in stones as long as you don’t throw them at me. You are free to worship whoever you want, but other people’s beliefs are not your concern, whether they believe that the Messiah is God, son of Mary, or that Satan is God, son of Mary. Let people have their beliefs.

Ms Sultan is an impressive woman, I like her, and her spiritedness. We need lots of women like her, all over the world. I can understand her ire against regimes like the one in Saudi Arabia.

But she is grossly unfair to Muslims, by condemning them all for the actions of some who act in the name of the faith. She could also place matters in true perspective, taking religion, theology, history, politics – and geopolitics - into account. I have no doubt whatsoever that Ms Sultan is a genuine humanist. But in her interview she does not at all touch upon things like the crusades, colonial occupation, missionaries, racism, the role of the USA, the role of the state of Israel etc etc. Hence, sadly, taken out of context, she would only strengthen Islamophobic currents.

Thankfully, YouTube also carries a response to Wafa Sultan by her interview colleague.

As an Indian too, I felt she was unfair to the Indian Muslim experience. Muslims in India occupy a very special place by virtue of their large number, and co-existence with people of diverse faiths, languages and cultures. Indian Muslims themselves are made up of so many ethnicities, languages and cultures. Talking of free and creative thinking, the first half of the 20th century saw the blooming of Muslim poets, writers, artists and activists in south Asia, who were rooted in the community at large – for instance in anti-colonial struggles or revolutionary activism. Islam, leftist politics and the arts – had a very rich fusion in south Asia, of which all, Muslims and everybody else, could be justifiably proud.

Today, in India, despite the overall marginalisation of and discrimination against Muslims, there are celebrated thinkers, entrepreneurs, painters, artists, film-makers, actors, singers, musicians dancers, sportspersons, poets, writers, scientists, social scientists, activists - who are Muslims, men and women, who, while being rooted in the community at large, also usually bring to the fore something distinctive through their Muslim identity. They are all positive ambassadors of Muslims, who help non-Muslims enlarge their vision and shed their habitually embraced prejudices. I have written earlier, referring to historian and writer Mukul Kesavan's insights on pluralism in India.

And there are also Muslims who are ordinary human beings, sons, daughters, brothers and sisters, husbands and wives, mothers and fathers, grandfathers and grandmothers, girls and boys, who are all part and parcel of the plurality that is India.

Islam, like all the other great religions of the world, is part of the heritage of humanity, and Muslims are the ambassadors of this heritage, for the enlightenment and elevation of humanity at large. Muslims too are human beings, like everybody else. They also have blood running through their veins, love and sorrow in their hearts, laughter and tears in their eyes, songs, of joy and pain on their lips. So why this distinction between Muslims and the rest of the world? And why not instead a zest to know more from, to share with, and to join Muslims, in building a better future for the whole world’s children?
Posted by rama at 5:39 pm

Thank you, Brother, for the interview and your own really spirited and true words :)

i completely sympathesize with Wafa Sultan here because she is coming from a deep frustration that belongs to the arab world which continues to live in very backward mentality, denying intellectual engagement and human freedom of expression. they abuse the religion as well and make excuse for their tribal attitude and thats where Wafa Sultan was coming from as i feel here.

I wrote a comment but it got lost. I live next to a mosque here in England and most of my neighbours are Muslims from Pakistan. I have gained new respect for their religion because I see how alive it is and what good it brings to their lives and the world. I won't ever become a Muslim myself and keep at arm's length from the practice of any religion.

So I agree with you that Ms Sultan is being unfair to Islam in general. I'm aware that my approval of Islam is based on purely local conditions, and see that her disapproval is equally biased by experience.

The thing is that my positive experience of Islam makes me understand that some Muslims may get so passionate in its defence that they commit atrocities which stain the beauty of that which they defend.

I think the way to counter terrorism is to work with Islam and not provoke it into hostility. The police here work very softly and sometimes even address the congregation in the mosque - I don't know what about, but it's clear their motivation is to help identify young radicals and ensure they don't get recruited to become suicide bombers.

Rama, been a while since I stopped by - so here is a hello to you and hope all is well.

This post is being featured on the OneWord blog, at the following link: