Come, walk with me 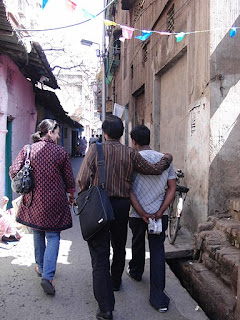 I had written about my friend Rahul’s memoirs of his activist struggles. Thanks to the wonders of blog-communication, Prof Swarup, an elderly Indian now settled in Australia, offered to extend financial assistance towards publication of Rahul’s memoirs. And now his manuscript is being actively prepared for publication by some very fine and distinguished people in the BlogBharti team. Rahul’s manuscript is a fascinating account of the India that his – and my – generation inherited and tried to engage with.

In his account, Rahul has referred to the inspiration he derived from the song “Chal mere saath hi chal”. I was remembering this song today morning. This is a ghazal, by the Urdu poet, Hasrat Jaipuri (who was also a renowned lyricist of Hindi cinema). The song has been evocatively rendered by the brothers’ duo Ahmed Hussain and Mohd Hussain. I first heard this at a concert of the Hussain brothers in Hyderabad, exactly 10 years ago. A few months later, I found a cassette-album of theirs (titled "Guldasta") in a shop in Ahmedabad, which included the song.

Anyone who has walked a difficult path, alone, along a "road less travelled", and shared with another an unconventional intimacy – would appreciate this song. Its also a favourite of my colleague Amina (who mistakenly thought I had composed it after hearing me sing it!).

Listen to the ghazal here (link provided by Bhupinder).

Let me attempt a translation:

Come walk with me alone, O my life-inspiration,
Break out of these socially constructed bonds
Come...

We shall go where there’s no surveillance on love
Where no thieves set upon hearts’ wealth
When has this world ever changed, you must change the world
Come...

Where no fingers are pointed about our union
Where no enemy scoffs at our desires
Do tease out melodies with love, a poem on love
Come...

Don’t look back, don’t join the wrong-doers
Look ahead, your destination is in the stars
If your heart speaks, may your intentions be unshakable
Come...
Posted by rama at 2:34 pm

thanx venkat for the whole ghazal. i had searched for the lyrics but couldnt get them. its such a lovely song. only the jaan in jaan-e-ghazal refers to the ghazal being the life or the inspiration of the poet. that is the ghazal is the inspiration for the poet. the sentiments expressed in this ghazal have become rare in today's age of crass materialism. reading the whole ghazal has given me a kick in the sense that i feel i have not wasted my years in the wild. if you can please send me the audio file of the ghazal sung by the hussain brothers if you happen to have it.

Beautiful lyrics, a Sufi song if ever there was one :)

Rama.
certain this will bring me back to desh...imagined things I guess...but the pull is strong.Such posts help me.You may not know how.
Thank you.

wow beautiful verses, would love to hear them in song.
beautiful. i love beautiful word explosions.