Cuckoos and their calls

I first came under the spell of cuckoo calls 35 years ago, when I was at school in the RIMC in Dehradun. With the onset of late spring-early summer, the loud, piercing calls of a variety of cuckoos resonated through the verdant school campus. Three distinct calls were imprinted in my memory, and especially one of them, my favourite, which had a hypnotic effect on me.

Through my five years in RIMC, April-May was indelibly associated in my memory with these bird calls. But I never spotted the birds.

I knew nothing about birds then (or now). I assumed the “coo-ooh” must be a cuckoo’s call, though I had never seen one. It was only a few years ago that I managed to spot a cuckoo calling, perched high and hidden on a tree. I later learnt that this was the Asian Koel. (Koel, or koyal or kukil are among the Indian names for the bird.)

Here is a picture of the Asian Koel. 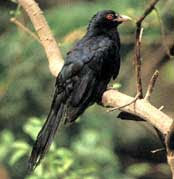 Many years after passing out from the school, I began revisiting RIMC. And each time I partook of the bird calls. I tried my best to spot the particular bird whose call enthralled me, but it was always too high up on a tall tree, and never visible.

Last week I was at the RIMC again, to attend the centenary celebrations of Hugh Catchpole, a former Master and Principal of the school. (Pictures from the Catchpole centenary celebrations are accessible here.) Almost immediately after I reached the school, I heard my favourite bird call. And following the sound, my son Rishiraj and I spotted the bird, in silhouette, perched at the very top of a tree. So now I had a clue and could try to find out what bird it was.

And thus did I come to know that this was the Indian Cuckoo.

Here is a picture. 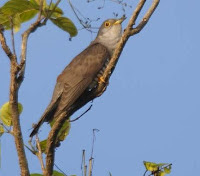 The bird is known locally in Uttarakhand as "Ka Phal Pa-kyo", based on its four-syllable note, which announces that the wild Ka fruit (a fig) is ripe. The same bird is known as “Bau-Kotha-Kou Pakhi” in Bangladesh and West Bengal. (The Bengali song "Ei udaashi haowaay pothey pothey mukulguli jhorey" by Rabindranath Tagore, refers to the cukoo's call by this name. See song no. 223 here.) Again, based on its call, which is here interpreted as the anguished cry of a bereaved husband, asking his still wife to say something.

And I learnt about the Common Hawk Cuckoo, also known as the Brainfever bird (for its call).

Here is a picture.

So it was a culmination of sorts for me, at the very site of the beginning.

Meanwhile, I had of course started this blog, with its title inspired by the Buddhist tale, The Prince who became a Cuckoo. That was a spur-of-the-moment decision. But it is most apt. I can’t have enough of cuckoos’ calls, and especially that of the Indian Cuckoo.
Posted by rama at 4:14 pm

The english cuckoo sounds like this. But it's a cuckoo clock not a real cuckoo. I will keep looking.

And here is the sound of the real cuckoo!

Many thanks Yves. Evidently I touched a chord... But that's hardly surprising isn't it?!

A very sweet post, and I love the bird calls :)

Great work, you I am very been thankful by sharing it with your visitors, congratulations

Rama you changed your name to Nila-Kantha-chandra. We still call you Rama?

Are you the same Rama that posted a comment at Yves post about the mystic traditions of "gold"? anyway if so just wanted to thank you for that info.

about cuckoo's...I wish we had some around here in my area!

Many thanks friends. Hullo Kathy! Yes, this is the same rama. Recently, I happened to revisit my profile etc, and made some changes. Nila-kantha-chandra: this comes from the story which inspired my blog title. The term means: blue / dark - throat - moon / disc. The term also pertains to me in a specific sense. Hence ...

You can call me rama, or bhama or nila or ... whatever you like!

Yes, I had made the comment at Yves' about "gold". Once again Kathy I am referring you to a verse on a poem which ponders on this:

"Even steven", they mock, and denigrate one another,
Rama looks, wistful and forlorn.
Searching, and feeling, mounted in reverse direction
Horse-dung's all that's begotten!

This is also discussed in:

Love to hear from you!

rama, would i be jumping guns if i ask whether you got that asian cuckoo recording from a common blogger friend of us? if so...it was recorded by a dear friend of mine.

Hi Ghetu, I got all the birsong recordings from the net, there are quite a few sites with bird calls. Thanks for your visit!

Hi...I lived till I was 13 surrounded by trees and woke up every morning to birdsongs.There were ghughus that sounded bored to death in the afternoons.Most birds were the chirping types except for the cuckoo that I have heard rarely after my childhood. The cuckoo I was told is a cunning bird that lays its egg in the crow's nest and disappears. It couldn't be bothered with practical jobs like bringing up kids.There is something in its call that is sweetly shrewd-a seduction that's a pretence. Its song heralds spring and the song is carried by the wind that inebriates the senses.The cuckoo song has always given me the feeling of passing romance that slips off the fingers too easily.Or passing childhood.The cuckoo song never makes me happy.

The postings of the different Cuckoo calls were great, but did you know that these birds have other calls too.

There are many of the "Asian Koels" around my house (they are always being chased by the crows during nesting season) and they regularly make 2 different sounds. The one you have posted is usually a kind of competition (I think, not sure) between two males. I have, many times tried to match this call with them by whistling and invariably it will become like a slang match and the pace will get quicker and quicker!

The female of the Asian Koel makes a different call.

My dad was an avid Ornithologist (he was a member of the Bombay Natural History Society when Dr.Salim Ali was its President and he contributed regularly to the BNHS's Journal, which was then edited by Zafar Futehally)

Dad used to take with him on bird watching trips - before RIMC - and my interest in birds has continued.

The best Bitcoin wallet in Nigeria and other African nations is additionally served in Malaysia and Indonesia, we make the purchasing or selling process quick and basic.

The best Bitcoin wallet in Nigeria and other African nations is additionally served in Malaysia and Indonesia, we make the purchasing or selling process quick and basic.