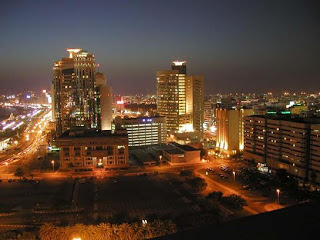 "... We were in a race against time and we won. But, as I have always said, the race has only just begun. With these achievements come new hurdles, responsibilities, and challenges… It is far easier to build financial capital than it is to build intellectual, psychological and moral capital. Building a road or a bridge may take a year or two, but developing people takes a lifetime..."


While I was in Dubai, the Ruler of Dubai, Sheikh Mohammed bin Rashid Al Maktoum, presented the Dubai Strategic Plan 2015.

I was struck by the boldness of the vision. In particular, I was very glad to know about the priority accorded to social development, public policy and cultural affairs.

As a social development and public policy specialist, I wrote to Sheikh Mohammad, offering my services towards realising the vision of Dubai 2015. God knows that despite my best efforts in the last 22 years, all my attempts in my own country towards making a difference in the lives of the poor and vulnerable have remained fruitless.
Posted by rama at 1:57 pm

You may consider your efforts to help the poor fruitless, but Allah does not, dear Brother. And inshallah, you may be able to offer good advice and help in Dubai. Allah will place you where He will.

The task seems daunting but chin up :) And keep going. I hope God takes you where you are needed the most, either in your home town or in Dubai :)

Thank you friends for your good wishes. "0 box - ha ha! Yes, everything is in Allah's hands, but we can also be Allah's hands, and I believe Allah would like his hands to mould the betterment of humanity. But for that, like with Masanobu Fukuoka's "do nothing" farming, which involves understanding and following nature's way, we need an active immersion in Allah's way. Obviously that requires discernment and wisdom. But that's what we have been born to realise and been given various faculties for. So, one keep's trying, and as Brother Irving exhorts, the discernment of the purpose and results are in Allah's eyes!

Hullo Preeti, thank you for your visit and comment. I have posted several pieces about my work over the years. You could go through the subject index on the left side of my blog page. Yes, our work did also involve microcredit, which we successfully ran for some years. But given the conditions prevailing in slums in metropolitan Calcutta, and the state of (or absence of) public policy, I was unable to make any meaningful impact, on the key things that matter. But the attempt continues. I should say I am not a votary of NGOs' development work; I'm more concerned about social and political change, the rights and dignity of the disenfranchised and marginalised, and people's movements for a better future.

I just keep visiting this blog from past two years. The posts here are unique and useful than other blog posts. Such a great info provided in this post. Keep providing useful post in this blog .I appreciate author for this valuable post. short baking courses in dubai, baking school dubai