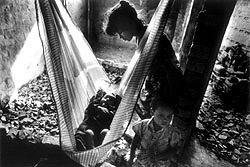 6th December 1992 was one of the darkest days in the history of modern India. The Babri mosque in Ayodhya in northern India was destroyed by a mob of vandals. Riots between Hindus and Muslims broke out across towns and cities in north India. Riots hit Calcutta too, with Muslim slums being torched in Tangra in east Calcutta and Metiabruz in west Calcutta.

After the experience of the Great Calcutta Killing of 16 August 1946, and more riots in 1963-64, Calcutta had at least been free of the horror of communal riots. The CPI(M)-led Left Front govt ruling West Bengal since 1977 had made communal harmony a major plank of its policy. But following 6 December 1992, sleeping demons were awakened.

Curfew was enforced in Calcutta in the days following 6 December 1992. For me, that led to an enforced engagement with this question, the Muslim question, something I had hardly thought about earlier. Afterwards, photographer Achinto and I went to Tangra. The people from the burnt out slum were sheltered in the municipal slaughterhouse. I will never forget that sight, a vision of hell.

A germ was planted in me. And that germ went on to take over and transform my life within 5 years. But before that all the habitual assumptions and notions, all the socialised conditioning and subtle prejudice in me had to be plucked out. I was fortunate to meet friends who aided in this.

There is a huge gulf separating Muslims (the overwhelming majority of whom are poor, barely educated, and self-employed) and educated Hindus in India. Its a question of perception and cognition. Very few even bother to recognise that such a gulf exists.

After I started working in Priya Manna Basti in Howrah and started Howrah Pilot Project, 6th December was observed by us as National Renewal Day. In 1998, we organised a cultural programme for the children of Talimi Haq School. A special harmony badge was made and worn by everyone. In 1999, there was ceremony where the Muslim children of Talimi Haq and Hindu children of a nearby school tied rakhis on one another (a wrist band symbolising brotherhood). An elderly community member who had spent much of his life teaching children of Priya Manna Basti was felicitated and honoured. And in 2000, this date fell during Ramadan and so we had a grand iftaar (fast-breaking) gathering for my new-found Muslim activist friends from Calcutta.

The great thinker and poet Mohammad Iqbal wrote the song "Sarey jahaan sey achha Hindustan hamara" (Better than the whole world, our India). But he is also considered to be one of the founding fathers of Pakistan, which was born as a separate homeland for India's Muslims. Iqbal wrote "Shikwa aur Jawaab-e-Shikwa" (Complaint to God, and God's answer), about the miserable plight of Muslims. After I started working in Priya Manna Basti, and began to understand the power of Urdu poetry, I wrote a song "PM Basti ke ham sab sachhey mussalmaan hain" (We are all true Muslims of PM Basti). I wrote my own "Gratitude, and God's Acceptance", to express my feelings for the blessing of India's plural heritage. And I wrote my version of "See the city from here" (the title of poet Faiz's poem), celebrating the love and harmony I found working with the women and children in Priya Manna Basti.

In 1946, leading up to the Direct Action Day, of 16 August, the slogan "haath mein bidi muh mein paan, ladkey lengey Pakistan" (bidi in hand, paan in mouth, we shall fight and take Pakistan) had spread like wildfire in Calcutta. In 1997, in my song Hariyali, I wrote:

The sacred land, being the land of harmony, where Hindu and Muslim children walk and grow together.

In the Ramayana epic, Prince Rama of Ayodhya had to take up 14 years of forest exile to uphold his father's honour. His father died grieving for his son. And before returning home, Rama had to vanquish king Ravana of Lanka to rescue his abducted beloved wife Sita.

Much has happened in these 14 years. In 2002, we had the horrific riots in Gujarat in western India. This was India's intimation of its version of the Final Solution. And just a few days ago, the report of the Sachar Committee was submitted to the govt of India (available for download here). This examined the socio-economic backwardness of the Muslim community in India.

Are we a pluralist nation, where everyone has a place of dignity, with justice for all?

Can Hindu and Muslim be as one, two inseparable parts that together make the whole that is India?

Does anyone want such an India?

Good morning Rama, as I was commenting on your many other posts a new one appears!

Nice post. We have learnt lessons from these riots and must ensure that such madness should not recur.

thanks for the post. we need to reflect on stupid mistakes made in the past against the humanity in the name of insanity.

India has the second largest Muslim population of any country in the world, after Indonesia, and as it treats that population is how it will be judged, not by its new wealth or its nuclear bombs. When all can read and write and work and live in peace, Allah will bless the land.