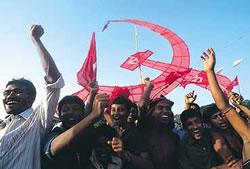 Like Rip Van Winkle, Biman Bose, the CPI(M)’s West Bengal secretary seems to have woken up! (According to Wikipedia, "Rip Van Winkle" means either a person who sleeps for a long period of time, or one who is inexplicably, perhaps even blissfully, unaware of current events.)

All the vices that power can induce in 30 years has crept into the CPI(M), the party leader admitted day before yesterday.

Biman Bose went on to list some of them — corruption, nepotism, personal gratification, factionalism and craving for power — while addressing Calcutta district committee cadre who had assembled to commemorate the November revolution in Russia.

“Some people have joined the party hoping that it would be a passport to jobs and other opportunities for personal benefits. Many flaunt the party membership to demand preference in school and college jobs,” Bose said.

The party appears to be suffering from the influx of such self-seekers as obtaining membership has become easier now. “At least 10 per cent of the new entrants are ideologically and politically unfit to be our members. How many of the 31,500 members in the city have gone through the party constitution? Let us swear, how many of us can rise above personal interests?” he asked.

Asking party committees to check personal backgrounds of membership aspirants, Bose said: “Don’t choose them from the types who want to be whole-timers just because of unemployment.”

He did not mention the Bally incident in which CPI(M) workers were arrested for harassing a housewife and beating up her husband; nor the Barasat incident, where a party leader was arrested for the murder of his own father in the context of a factional conflict. Bose decried the increasing involvement of party cadre in real estate and supply of building materials.

“I heard people are asked to buy cement from one, brick and iron rods from another. Later, it is found that party leaders are behind these businesses,” said Bose, also a party politburo member.

The party used to go to the people earlier, now it is the other way round. Feuds within have assumed “cancerous” proportions as some leaders are “ruining party democracy for personal gain”.

A split Opposition is seeing the CPI(M) through in the state, the leader suggested, saying “a divided party will be in more trouble” as the Opposition parties close ranks.

“Be respectful and sympathetic towards toiling people.” As the CPI(M) became appealing to “those who had never voted for the party earlier” — the middle class — it lost touch with its original supporters.

This is not the first time that a CPI(M) leader has expressed concern. Several years ago, the late Benoy Choudhury had described the West Bengal government itself as one run by “contractors”.

The CPI(M)’s plan to expand its base in the north Indian Hindi heartland is being hobbled by a lack of dedicated organisers as leaders are not keen to leave secure sanctuaries like Bengal.

The party also has to ward off competition from NGOs in recruiting cadre. Prospective party workers, “idealist and socially committed youth”, are allegedly being lured away by NGOs offering better salaries and perks.

“Not many leaders are ready to leave Bengal to work at the party centre in Delhi from where organisers are assigned specific state responsibilities. Relaxed life after 30 years of Left rule has made insecure and harrowing jobs elsewhere unattractive to many,’’ , says MP and central committee member from Bengal Hannan Molla.

“Today, student and youth organisations in Bengal do not produce dedicated organisers like the whole-timers of yesteryears who would risk life and career for a base outside Bengal,’’ says another central committee member from Bengal.

Even the “leaders of earlier generations are reluctant to venture out”, he adds, attributing it to a “mindset that develops because of the trappings of power”.
Posted by rama at 10:30 am