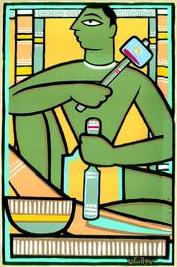 Vishwa Karma, the divine architect of the universe.

Son of Brahma, the Creator, personification of the creative power that welds heaven and earth together.

The divine carpenter carries a club in his right hand and holds tools in his left.

Revealer of Sthapatya Veda, the science of mechanics and architecture.

Lord of the Arts.

Executor of a thousand handicrafts, most eminent of artisans, fashioner of all the ornaments, on whose craft all men subsist, and whom, a great and immortal God, they continually worship.


From the Rig Veda.


Today, 17 September, is the day of Vishwa Karma Puja in eastern India.

Vishwa Karma means “(the one who guides) the world’s work”. “Puja”, derived from Tamil, means worship or adoration, with flower offerings.

Factory workers, mechanical workshops, artisans, craftsmen etc all worship Lord Vishwa Karma on this day. It is a happy holiday for all industrial establishments. Images of Vishwa Karma, with his vehicle, an elephant, are installed in the premises. A variety of fruit offerings are made to the Lord. And there is a feast for workers, staff and their families. Vishwa Karma Puja used to be a grand affair in large industrial establishments in Calcutta. In the evenings staff associations would put up major stage productions.

In my childhood, on this day the sky in Calcutta used to be dotted with thousands of kites. In fact, non-Hindu boys used to know this as the “kite puja” day. It was the day, towards the end of the rainy (monsoon) season, on which kite flying peaked. That association with kites continues, especially for the humble folk; but in the main, kite flying has simply declined over the years due to various factors.

Boys – and men too – would fly kites from the roof terraces of their homes, or from open fields. As a song by the Bengali singer Anjan Dutt reminds us, the roof tempted and called out to the restless boy! Kite flying – was a serious sport.

Preparing the kite string (manja): using a boiled arrowroot starch base, with a garnishing of glass powdered in a mortar-pestle, and a colour of choice added; applied carefully by hand to the string strung out between lamp-posts, using small pieces of cloth; and then waiting for the string to dry; and finally reeling the crisp sharp string into the latai (the spindle-reel). This was an elaborate and sombre ritual, undertaken on the day before Vishwa Karma Puja. Rather like the elaborate preparations for pujas in my own household, which began with grinding rice flour, for making delectable sweet and savoury offerings. There was muted but feverish excitement and anticipation - of flying the kite on the day; of taunting others to fight; playing the kite and string, and trying to fathom the opponent's weakness; and then the ecstatic cry: Bokatta! I’ve cut you! Lope! Try to catch it! And finally trying to catch the flailing-sinking cut kite's on one's own string.

I never learnt to fly a kite. But I was happy to be slave, assistant and latai-holder to a master, Dhiren, the servant in our house, who was about 6 years older than me. He was outstanding, in kites as well as in marbles games, spinning tops (which also involved a fight between opponents, to break the other's top with one's top), and in dan-guli (known as guli-danda in north India), another folk sport, where a small piece of wood was sought to be hit to great distances with a longer stick.

All this required immense interest, commitment, effort, skill and talent. The expert or champion commanded great respect and awe. Slums were never too far away from the "decent folk's" neighbourhoods, and so play often involved mixed groups. Sadly, the talented champions from poor families were left behind by their better-off playmates, who went to good schools; childhood mates were parted by unequal social opportunities. One remained in a small, closed ambit; for the other it was ever-expanding horizons.

The industrial economy of Calcutta and the state of West Bengal has died over the last 4 decades. Workers of closed factories were driven to suicide. With tertiarisation of the economy, Viswa Karma Puja is today observed more by bus drivers and conductors, taxi drivers and cycle rickshaw pullers.

The last 15 years or so has seen old houses giving way to apartment blocks. Open fields and vacant plots have all gone. People do not have access to kite-flying spaces anymore. Integration between classes has waned, and disparites, alienation, polarisation and hostility has grown.

And there are so many more attractions for middle class children nowadays, from satellite television to video and computer games to amusement parks and arcades … hence children's games and sport like kite flying, marbles, spinning tops, dan-guli etc - all of which obsessed kids and teenagers in Calcutta 35-40 years ago, as well as their earlier generations - have all been forgotten. The better off sections have moved on, to new allures, leaving the traditional things to the socio-economically weak and marginal.

Calcutta used to be the centre of kite-making in India. But the kite trade in Calcutta is in poor shape today.

Though its a Sunday, I will be at our factory. This is a small manufacturing enterprise started by my late father in 1967, which I am now managing on behalf of my family. We manufacture precision instruments for industrial, scientific and medical applications. It started out as an import substitution venture; 4 years ago I began working towards export, and today our instruments are supplied worldwide. But there’s a long way to go – to secure our place in a globalising world – and much work to be done.

A sumptuous feast will be prepared. I will be serving and eating with our staff and workers. And in the evening I leave for a work-related trip, to the place of my family's roots, in south India, to return after 4 days.

Happy Vishwakarma puja to all!

I hope you have a productive and fruitful journey.

My late father who was an eminent steelmaker and engineer took me to Vishwakarma Pujas in the huge steel plants since the time I can remember and I have many fond memories. Vishwakarma Puja is also observed by people in the building fields. The feast involves much boozing and eating mutton. Though many people in the building trades are Muslims, everybody participates with much enthusiasm. As an architect I get invited to some pujas where I do ample justice to what is spread. This year was no different!

What a wonderful piece. Thank you for sharing. I only recently read about the tradition of kite flying in a novel called "The Kite Runner"

Happy Vishwakarma puja to you!

Vishwakarma Puja is not confined confined to Eastern India any more. Thanks to the ever wandering spirit of Bengalis,it has reached almost all parts of India. And here in Gurgaon we had celebrations too.
Your post brought back those fond memories of Calcutta(I left the city when it was still called that) and kite flying. I still remember the cuts we used to get on our thumbs and forefingers while flying kites or while making manja. And those exhilarating kite fights (pechas!) used to be really competitve. Wow, spinnig tops and marbles...those were almost like addictions. I find my son and his frineds spinning Beyblades which is a big craze amongs kids these days. But its nothing more than a mechanized version of our good old lattoo.
Wendy C mentioned about the "Kite Runner" and I happened to have read that book recently too. And its fabulous!
Cheers!

Sadly, things change, yet it is good to remember and honor what once had been. This was a sweet, poignant tribute.