The Age of Kali, and Kalki 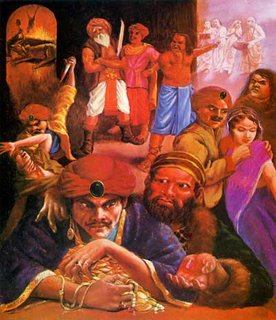 I also wrote yesterday about Kalki, the incarnation of Vishnu (who sustains life) who is prophesised to come at the end of the age of Kali.

Here’s a description of Kalki from WJ Wilkins’ Hindu Mythology, Vedic and Puranic:

"It is the hope of the Hindus that he who has so frequently visited the earth to restore order and happiness will come yet again to inaugurate a reign of universal goodness, peace and prosperity. When Vishnu in the form of Krishna re-ascended to heaven, the Fourth or Kali Yuga commenced, which, as its name implies, is an age of strife and dissension. In the “Vishnu Purana” the character of this age is vividly described in words that seem prophetic. At its termination Vishnu is expected to come again, bearing the name Kalki, to put an end to wickedness, and establish a kingdom of righteousness similar to the First or Krita Yuga - the age of Truth. These four ages, in the same order and with similar characteristics, will again and again be experienced until the final end of all things shall come. The following extract from the “Vishnu Purana” will give an idea of the evils of the present age, which Kalki is to remove.

‘The kings will be of churlish spirit, violent temper and ever addicted to falsehood and wickedness. They will inflict death on women, children and cows; they will seize the property of subjects, be of limited power, and will, for the most part, rapidly rise and fall; their lives will be short, their desires insatiable, and they will display but little piety. The people of various countries intermingling with them will follow their example; and the barbarians being powerful in the patronage of princes, whilst purer tribes are neglected, the people will perish. Wealth and piety will decrease day by day, until the world shall be wholly depraved. Property alone will confer rank, wealth will be the only source of devotion, passion will be the sole bond of union between the sexes, falsehood will be the only means of success in litigation, and women will be the objects merely of sensual gratification. Earth will be venerated only for its mineral treasures (i.e. no spot will be peculiarly sacred); … external types will bethe only disctinctions of the several orders of life, dishonesty will be the universal means of subsistence, weakness will be the cause of dependence, menace and presumption will be the subterfuge for learning, liberality will be deviotion, simple ablution will be purification (i.e. gifts will be made from the impulse of ordinary feeling, not in connection with religious rites or as an act of devotion, and ablution will be performed for pleasure or comfort, not religiously with prescribed ceremonies and prayers). … Fine clothes will be dignity, and water afar off will be esteemed a holy spring. The people, unable to bear the heavy burdens imposed upon them by their avaricious sovereigns, will take refuge among the valleys, and be glad to feed upon their wild honey, herbs, roots, fruits, flowers and leaves; their only covering will be the bark of trees, and they will be exposed to cold and wind, and sun and rain. No man’s life will exceed three-and-twenty years. Thus in the Kali Age shall decay flourish, until the human race approached annihilation.’

It is rather strange that the condition of men, in what appeared to the writer of this Purana as the most miserable he could imagine, where their dress was bark and their food consisted of roots and fruits, was in the earliest ages regarded as the most desirable. It was thus the old Rishis (sages) lived, who are held in the greatest esteem.

‘When the practices taught by the Vedas and the institutes of law shall nearly have ceased, and the close of the Kali Age shall be nigh, a portion of that divine being who exists of his own spiritual nature in the character of Brahma, and who is the beginning and the end, and who comprehends all things, shall descend upon the earth. He will be born … as Kalki, endowed with the eight superhuman faculties. By his irresistible might he will destroy all the thieves, and all whose minds are devoted to iniquity. He will then re-establish righteousness upon earth; and the minds of those who live at the end of the Kali Age shall be awakened and be made pellucid as crystal. The men who are changed in virtue of that particular time shall be as the seeds of human beings, and shall give birth to a race who shall follow the laws of the Krita Age, of Age of Purity.’

In the descriptions of Kalki, and in pictures, he is represented as a white man riding upon or bowing down before a white horse, and with a sword in his hand: he is the purifier of the present degenerate age, and the restorer of purity and goodness."
Posted by rama at 11:00 pm

I have read the blog which u have written. I have something to tell about your topic.

All the Vedas, Ramayana, Mahabaratha etc are modified by the Kings...

And these are my comments..

6th world means -- A soul getting sixth sense...ie., a soul getting Humanbody. We have six sense.
7th world means -- Light has 7 Colours -- Means a soul getting like light--- U can't damage that body by any means... And ppl like Vyasagar, Vaanmiki (Kings had changed his name to Vaalmiki), Bogar (who wrote "Kantha Puranam in Tamil" and lived in Palani, TN, India), etc... have already had created that body...

LORD is the person who owns your body... Here lord is your soul... Without HIM, nothing can function in your body...

VISHNU - The Heat in the SOUL. The body will not have any heat when the SOUL goes out!!!

ALL the TEN avatar's are taken by your SOUL.

There is no superficial thing like GOD creating all the things...
Ppl who lived 3k years back have seen their LORD.

SOUL will surely create next body, it may be a dog, cat, snake etc... U can choose your next body (PILLAIYAAR - A term used in Tamil Nadu.)only in this birth (Human Body).

GANESHAN - GANANGAL(Each and Every atom of your body) + ISHAN(The thing which created this body based on GANANGAL ie.,U'r Soul is termed as ISHAN.)

SOUL(GOD or ISHAN) lies in the middle of your Eyebrows. That's wat they say in the sculpture with the third eye of SIVA..

Please come to TamilNadu, India to learn more about this..

Hope this might have cleared some of your doubt.

This concept of Hindu mythology is really great.