The Canticle of Brother Sun 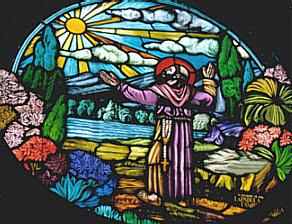 Song, music, and poetry were so deeply a part of the nature of Saint Francis that in times of sorrow and sickness as well as of joy and good health he spontaneously gave voice in song to his feelings, his inspirations, and his prayers.

The clearest expression of this aspect of the personality of the Poverello is the "Canticle of Brother Sun".

G. K. Chesterton, in his reflections on the saint, wrote of this work: "It is a supremely characteristic work and much of Saint Francis could be reconstructed from that work alone."

And Eloi Leclercq has written: "The manner in which Francis here looks at the created world is a key to his inner self, for the Canticle undoubtedly has elements that reveal in a special way the personality of its author."
The most characteristic Franciscan contribution to poetry and music is found in a body of informal spontaneous hymns called laudi spirituali - songs of praise or, simply, "lauds" -traceable directly to St. Francis and his immediate circle. The practice of spontaneous hymn singing continued from his time onward and in the 14th century was firmly established as the most popular form of religious music.

In music, as in his religious work, St. Francis drew together the sacred, courtly, and popular traditions. The lauds were thus a poetic bridge between the traditional music of the Church, the music of the castle, and the music of the streets. The words always had a religious theme; often they were mere paraphrases of psalms and litanies sung to popular airs, but, above all, they were music and poetry that the people could both sing and feel with their hearts.

The lauds were folk-like in spirit, simple and direct in their appeal, and sung either as solos or jointly with others in unison. The lauds became the special and characteristic expression of the Franciscans.

The Canticle of the Sun (or The Canticle of the Creatures), known definitely to be by St. Francis, is at once the most sublime of all the lauds as well as the most original. The legend goes that when St. Francis was recovering from an illness in a hut outside the convent of St. Clare, the nuns heard from his lips this rapturous new song. The informality, even casualness, of its composition and its rambling rhythms and rhymes make it as simple and unaffected in its form as the Umbrian dialect in which it is written. It is thus characteristically opposed to the canons of scholarly Latin on one hand and to the erotic courtly utterances of the troubadours on the other. Sincerity and deep human feeling dominate the unequal strophes of St. Francis' songs of praise, rather than any attempt at learned communication or poetic elegance.

The text of the Canticle in the original Italian (Umbrian), together with a recitation of this (MP3) is available here.


Most High, all-powerful, good Lord,
Yours are the praises, the glory, the honor, and all blessing.
To You alone, Most High, do they belong,
and no man is worthy to mention Your name.

Praised be You, my Lord, with all your creatures,
especially Sir Brother Sun,
Who is the day and through whom You give us light.
And he is beautiful and radiant with great splendor;
and bears a likeness of You, Most High One.

Praised be You, my Lord, through Sister Moon and the stars,
in heaven You formed them clear and precious and beautiful.

Praised be You, my Lord, through Brother Wind,
and through the air, cloudy and serene, and every kind of weather
through which You give sustenance to Your creatures.

Praised be You, my Lord, through Sister Water,
which is very useful and humble and precious and chaste.

Praised be You, my Lord, through Brother Fire,
through whom You light the night
and he is beautiful and playful and robust and strong.

Praised be You, my Lord, through our Sister Mother Earth,
who sustains and governs us,
and who produces varied fruits with colored flowers and herbs.

Praised be You, my Lord, through those who give pardon for Your love
and bear infirmity and tribulation.
Blessed are those who endure in peace
for by You, Most High, they shall be crowned.

Praised be You, my Lord, through our Sister Bodily Death,
from whom no living man can escape.
Woe to those who die in mortal sin.
Blessed are those whom death will find in Your most holy will,
for the second death shall do them no harm.

Praise and bless my Lord and give Him thanks
and serve Him with great humility.

Here's a clip from Franco Zeffirelli's Brother Sun, Sister Moon (1972), with Donovan singing a song based on the Canticle.

Another interesting video-clip of a song in Italian, sung by Claudio Baglioni to the musical score of Riz Ortolani, from the Italian version of the same film, titled Fratello Sole, Sorella Luna, based on the Canticle is shared below.

Reference: Websites of Franciscan Friars and the University of Massachusetts Lowell.
Posted by rama at 10:00 pm

If you can obtain DVDs for viewing, I recommend "Brother Sun, Sister Moon" directed by Franco Zefirelli, which covers St Francis' life from his impetuous youth till he obtained approval from the Pope to start his order of poor brothers. It used to be one of my favourite films.

I think I've seen this film that yves speaks of...i was a teen-ager. I was thinking of this film as i was reading this post. interesting!

Thanks a lot Yves for this ref. This is a must-get now! Best, rama